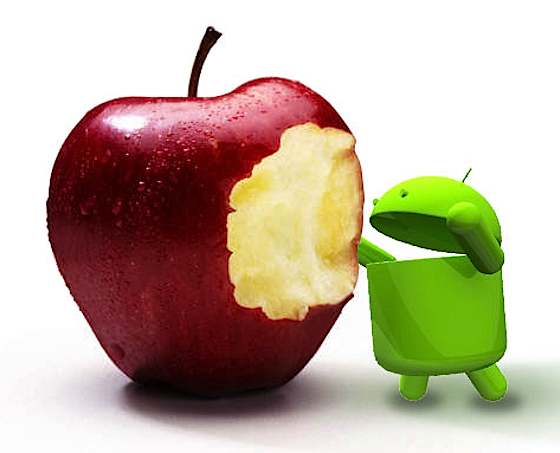 Good afternoon, Synapse Circuit Readers! I don’t know if you have read my blog that wonders if ‘Apple Brainwashes their users’, have you? I am now convinced that most Apple product users have been brainwashed... Yes, my Adorable Friend has started her mini-Apple campaign on me... Hee hee...

...iOS 7
Yes, my Adorable Friend and I had a little chat over the weekend via the Viber app... Sadly, we hardly find time to talk these days... She’s busy with her new business venture and I with my reviews, blogs, etc. But as always towards the end of our conversation she teased me about getting an iPhone and a Mac. She has just gotten wind of the forthcoming iOS 7 operating system and she was telling me how wonderful it is and how it is better than Android and that I should stop “deluding” myself. Lol! The she swiftly moves on to the subject of me getting a Mac... Lol!

I had to point out to my Adorable Friend that a lot of the “new” features such as multitasking, quick access to settings and advanced notifications have been enjoyed by Android users for at least a couple of years! Of course there is no comeback to the assertion of this fact. My Adorable Friend claims to “love” technology and admits to being a Star Trek fan yet she, like a lot of Apple users, does not seem to look beyond Apple where the love of technology is concerned. She should know more about what’s going on with other technologies.

As you know I LOVE technology big time and while I can’t profess to know every detail, trends, etc I do try to keep an eye and ear open to see what’s happening across the board... I can’t deny that there are times when I find it hard to keep up or understand certain concepts, but I do try. If anything my enthusiasm for all things tech opens up my mind a little more than the average person.

If you are a power Android user there’s no point in me going over the same things that you already know. This article is not necessarily aimed at the Android know-it-all-dork-geek.

WHY PC OVER MAC?
Despite the fact that I hate Microsoft for the inconsistencies in their Windows operating system I prefer a PC to a Mac any day of the week! When I see past my hate of Microsoft I do realize that they have a tougher time in that there are so many darn components for the Windows operating system to contend with... Ex amount of graphics cards, sound cards (even though sound is upon the motherboard these days), CPUs and what have you! I can see that it is not always easy to maintain a consistent support throughout. Not to mention the various bits of software that can cause a system shut down – oddly enough these instances came from Windows XP Pro and Internet Explorer 8! And do not get me started on these bloody service packs... Grrrrrrrrrr! The old adage that you get what you pay for rings true always! With a PC I have noticed that the more you spend on it the lesser the chance of something going irretrievably wrong! But that chance is there nonetheless!

I have two PCs... One I use for all manner of graphics / web design and general office duties and another for making music – not that I have time to make music lately! Lol! The design PC is pretty cheap and the darn thing can never perform an automatic upgrade for some reason I have yet to figure out. The music PC is able to auto upgrade but bloody constantly to the point where it’s around two to three or even four times a day! Jeez, gimmie a break! It’s annoying; why can’t the upgrades be performed one time? At least it is able to upgrade without reverting the changes. Small mercy!

The amount of money you can spend on a good Mac you’d be, probably, better off investing into a decent PC! If you have just joined me I will tell you briefly that I looked into buying a Mac once upon a time... I visited the Mac section of PC World and I tell you, I wanted to punch the Mac salesman out! Lol! I am not violent! Honest! Throughout his pitch one word came up too many times to count and that world was, “professional” (and the variant, “pro”). I’m standing there wondering if this guy thinks that the more he says “pro” or “professional” the more likely I am going to buy a Mac. I am looking at him thinking, “$@%£#*# idiot!”

HACKINTOSH?
Now this is where I think that these computer geeks have nothing else better to do... Some people would actually build the perfect PC just to run the Mac operating system on it. It is a complete waste of time in my humble opinion because once you have the perfect PC components you are then able to run the Adobe suite of software with ease! Most people who use a Mac tend to use Adobe stuff. I guess the only good thing about going to all that effort to build a Hackintosh is that one can complete the challenge. It’s like that guy who did a tightrope walk over a stretch of Grand Canyon without the aid of a safety net; what was the point? Well, no doubt everyone has a sense of what an achievement is but if I was going to achieve anything in the computer world I would love to put together a PC that runs on Android. That would be a worthwhile achievement. I still think the desktop has its place and Microsoft has squandered opportunities. Why, Microsoft? Why? I am considering Ubuntu. Funnily enough my brother has installed Ubuntu on his laptop after being fed up with Windows and a couple of years ago my brother was not very computer literate. Well done!

Look up on how to build a Hackintosh; you might find it amusing... All those wonderful components...

CHOICE
The main reason why I stick with the PC – for now – is that there is a vast range of choice when it comes to software. Just go into a store such as PC World and you’ll see that PC easily outnumbers what is available on the Mac.

When I was considering the Mac I was impressed by the iWork suite of software that came as part of a Mac mini. I was interested in web design and music making. Garageband looked really enticing and it reminded me a little of Magix music making software.

In the end, as you know, I stuck with the PC! For a couple of months now my Adorable Friend wishes to create her own website for her business, she owns a Mac and for all her one woman Mac campaign she is unable to create such as site. I told her that if she had a PC or a PC emulator then she could use a great range of excellent WYSIWYG web design software that can deliver professional results. I am tempted to pack up one of my PCs and go over to Sweden and get her site done; but time doesn’t permit. She now has a WordPress site which isn’t a bad compromise; it is what it is... ...a compromise... So much for the Mac as a creative tool... Of course, a person with some graphic design skills and experience with web design software for the Mac should have no problem in creating a site.

The point is that the Mac is supposed to be easy enough for anyone to use at an entry level. My Adorable Friend claims that she can hack Facebook accounts and jailbreak (root) her iPhone but she can’t do any graphical design work let alone build a site. Well, I started out the opposite direction: I was largely self-taught as a graphic / web designer. Taught myself how to build a PC from scratch – it wasn’t as easy as it is now.  And I eventually learned a little about rooting my Android handsets. I would say “hack” my handsets to sound more clued up; however, it is not the case. I am still learning. The next stage of my technical evolution is to learn how to program... I will probably start by learning how to create apps for Android. How? At this moment in time I have not much of a clue!

As much as I have had some problems with Windows I do appreciate the great range of software available to me... From expensive Adobe software to inexpensive equivalents; oooh, not forgetting the amount of freeware! When it comes to music... My goodness... There are so many freebies out there for the PC owner in the name of music making: digital audio workstations, virtual synthesizers and effects... WOW!!!! Just take a look on the Synapse Circuit website for some freely available resources.

COMING ROUND...
I guess the more I think of the Samsung ATIV Q the more it makes sense... A dual boot Android and Windows 8 tablet... Hmmmm... I am just thinking of the amount of music making software I have amassed over the years...Sheesh! I’d be happy to replace my antiquated PCs... I think I’m starting a PC museum. If I told you how many PCs I have owned over the years and how many I have lying around doing absolutely nothing you’d probably wonder about the state of my mind. But seriously, I used to love tinkering with them... Taking them apart, swapping out components, etc. You have to love messing around with technology... You do get to learn quite a lot from it. The only thing I didn’t learn was that I should’ve gotten rid of the darn things earlier! Lol!

For all my frustrations it is truly a wonderful thing to be able to put together your own PC!

WINDOWS OPSYS UPGRADES: ASSISTANT
What many Mac folk don’t understand is how complex it is for Windows users to upgrade to the latest operating system. As discussed earlier, there are so many component incompatibles to consider that it’s a pain. There is the ‘Assistant’ software that scans to see if a PC / laptop can take on the upgrade.

Mac owners are lucky in one sense that Apple keeps a tight rein on their computer builds. Another thing that has been so annoying is that Windows operating system upgrades have been so bloody expensive! I think that the recent trends in smartphone and tablet technology have had a critical impact on the cost of Windows operating system upgrades. There may be some life in Windows yet! C’mon, Microsoft! Get your act together!

HYPNOTIC?
Check out this edited video below and tell me if Apple fans aren’t being hypnotized / brainwashed...

Let me also leave you with the rants of an iPhone fan... The following is real...

"Android is a cheap knockoff.
Always has been and always will be.
If Apple borrows something, well that's just too bad -- that's the price you pay for being so "free" and "open". You know, those 'qualities' the robots are always bragging about.
And Apple will do it better anyway.

Leave your dirty 'droids at the door.
No one here wants to hear about them.﻿.."

This was in response to an article I posted in an Apple community to find out what they thought of the recent WWDC.