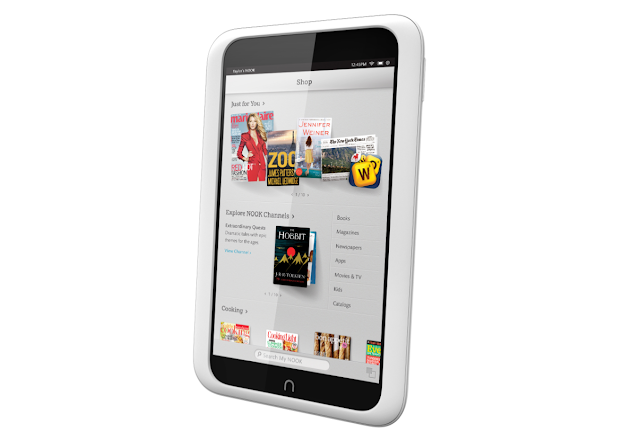 Good evening, Synapse Circuit Readers! As I have just not long posted up yet another article on the Android (and Windows hybrid) tablets I got the news that Barnes & Noble are quitting the business of tablets... It makes me think that I just might be onto something...

CHRISTMAS 2012
I cast my mind back to Christmas or for the non-Christians, The Winter Holidays and for Pagan’s, The Winter Solstice... I walked into a branch of W. H. Smith’s and looked at some interesting looking tablets from Barnes & Noble. Oh, W. H. Smith’s is a large book and magazine store that has recently taken on eBook Readers and lately tablets.

Let’s look at one of their tablets:

Hmmmm... That’s not bad. But what is to distinguish it from similar lesser known brands from China that can be found in the likes of Maplins? I think the screen isn’t bad at all; one of the best screens that I have seen on a 7” tablet. The CPU is pretty good too. But that’s about it.

The design is not very inspirational and it does remind me of what you’d see in a 90s Sci-Fi movie. The design is BAD! The bevel looks like something Joan Collins would wear. I don’t know who designed it but that person should be collecting social money.

OBSERVATIONS
Bad design and screen aside, there is nothing really outstanding about the Nook HD. And that is the trouble with a lot of Android tablets... They have blanket blandness about them. The specs seem to be just enough to appear competitive with every other 7” tablet out there.

I think it is pretty defeatist of Barnes & Noble to quit, but if there’s no money in the kitty to continue then so be it. I can’t help but replay what Google CEO, Larry Page revealed about the costs to produce a handset, “$1”. So, I would imagine that a 7” tablet would cost around $3 - $5 – maybe even $10! Handsets have 3G, 4G, Wi-Fi and Bluetooth, thus tablets should have all those wonderful connections by default. The problem is that many Android fans put up with this crap! Nobody really questions what they are presented with. Instead of saying, “I’m not going to buy that crap!” it’s... “You don’t really need 3G or 4G; I could just use my phone as a hotspot...” That’s not the point! Fellow Android Fans / Users, if you want the best you have to insist upon it!

IF IT’S BROKE, FIX IT
I think Barnes & Noble shouldn’t quit – it’s not noble (sorry). All they have to do is up the screen ante because reading stuff on a tablet for extended periods requires a darn good resolution. If it’s broken, fix it. I honestly believe that the Android tablet market is a little broken because there is so much crap out there and the known manufacturers seem to be standing out in small margins. They are giving us stuff in a piecemeal fashion. I don’t think it’s a good thing. It’s no wonder Cook and co can take up a considerable amount of time ridicule the Android tablet in their product launches.

MANUFACTURERS ARE YOU READING?
Forget about kicking Apple’s ass! I’m kiddin’! In my most humble opinion the Android operating system kicks a$$! There isn’t an operating system out there that is as good! But you need to take hold of the reigns... What’s next? A tablet from Fisher Price? Actually, there are some good inexpensive tablets for children but we Androids want something more than distracting rug rats from the main computer or mobile phone. We want something cost effective too!

To stand out from the iPads and Surfaces we do need a great design, robust materials, all the connectivity going, quad-core, 2GB RAM, good internal storage, external SDcard and sockets i.e. HDMI, USB, etc.

Well, I will finish up now as I am pretty much starting to repeat myself. In my mind I see a pile a mile high of cheap Android tablets polluting the planet.