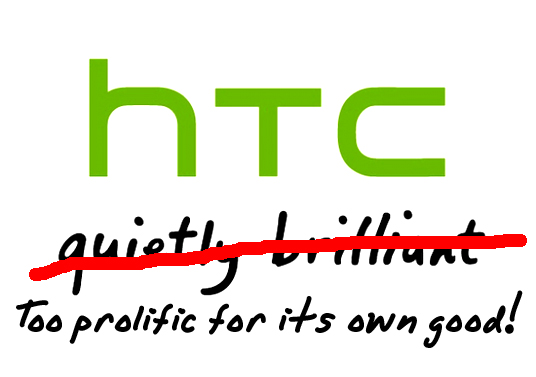 THE TROUBLE WITH HTC
It’s no secret that HTC are having financial troubles of late… Some speculate that it’s down to Android… Ha ha! You wanna know the trouble with HTC? Ok, I’ll tell you…

THROUGH THE WINDOWS
It has been said that HTC have enjoyed great success with their Windows handsets and it is hardly surprising! The Titan and Radar look stunning and exude the quality of build that we have come to expect from HTC! It’s my opinion that HTC handset designs are up there in the top 5 – way above the iPhone design! Well, the iPhone isn’t on my top 10 let alone my top 5! Yeah, I know… I must come across as an iPhone hater, but it’s just a phone that has had some design on it and I simply don’t like it! From what I have seen of the forthcoming iPhone 5 (I hate concept art because it is often better than the eventuality) the design has been greatly improved. But if it just looks like a bigger iPhone 4S it is a design failure straightaway!

Can you see how HTC Windows handsets have been a triumph? Yes, it’s because there are only two models (as mentioned above, Titan and Radar)! Ta daaaa! Simple!

HTC XTC SENSATIONAL DESIRES
However, when it comes to Android handsets HTC are like wildfire (pun intended)! Just look at amount of handsets they have on the market… I don’t even want to count!

Where HTC has gone wrong with Android is that it hasn’t fully established a key model like what Samsung has done with their Galaxy range. By now every man, woman, child and pet know the order of the Galaxy range… At the very top is the Galaxy SIII at the bottom is Galaxy Ace. I am sure that there is a mid-range phone, such as the Galaxy S Plus… The ultimate is the Galaxy Note II!

HTC have gone Android handset crazy! Incidentally, my first Android handset was the HTC Hero! I thought the Hero was a good handset, I preferred the design over the original iPhone what with its little trackball and that it had Adobe Flash on it! I was very impressed! But what did HTC do the following year? They released the Desire; again it was a well designed handset with a crap internal storage capacity! What’s with that? Why manufacture a handset that can’t take on too many apps? Anyway, the Desire was followed by the Desire HD and, if memory serves, they followed with the Sensation. It’s just too many handsets! Maybe it’s because Android is a free operating system that HTC feel that they can run with as many ideas that come to their mind, introducing the new HTC Itchy Feeling! NO!!

What HTC ought to do, check me… …telling a multibillion dollar company what to do… hee hee… But seriously, HTC needs to stick with one (that pun was accidental) concept and build on it!

This could possibly be the One X series! What HTC shouldn’t do, unless they are scrapping the “One X” concept, is to release another high-end handset with yet another concept name! I have understood that a One X + is on its way! Hmmmmm…

HTC MARKETING
HTC doesn’t do an awful lot of advertising but when they do they get it wrong! Ok, not as wrong as Apple’s “Genius” ads, but wrong all the same… Why?

With the One X ad it featured some designer who I’ve already forgotten and that’s the beginning of an ad campaign fail! Yes, I remember the designer skydiving and taking a either video or photos of a model striking a pose. Hmmmm, that ad is up there with one of those bizarre independent films… You just don’t know or understand the purpose… I guess the ad was saying if you are going to spend so much money on getting the ultimate fashion shoot then why not use their top of the range handsets? I can see the logic, but I would rather use a dedicated camera for the purpose!

You can see why Samsung have come up tops with their ads. The ads for the SIII showed off its practicalities from receiving a text and making a call, Smart Stay, S Beam, Burst Shot Mode, S Voice, Friend Share and so on. You know about what the SIII can do before you’ve picked it up! I didn’t have to think about what Samsung was getting across because it was obvious and as a phone user their “Usage” ads have stuck in my mind.

I would have like have seen what the HTC One X is all about! How would I use it and what are the outstanding features?

HTC also should get a popular celebrity to endorse their handsets! Again, I have to use Samsung as an example because they know how to do it… Samsung has used sport’s superstar David Beckham to great effect and to tie him in with the Olympics was a masterstroke genius idea! I have got to hand it to Samsung; they have stepped up their ad campaign greatly and have got it right! They don’t talk down to their audience unlike a campaign from another corporation that I don’t care to mention… Oh, you just have to laugh with Samsung and at certain devotees with ads aimed at enlightening the willfully ignorant! Genius!

CONCLUSION
No, that’s not another HTC model coming anytime soon! The conclusion is that it is HTC has been its own enemy! It hasn’t been Android!

To recap: They need to scale down the amount of phones they produce and think about longevity i.e. ready for Android upgrades! It seems to me that they take way too long before their handsets see the latest upgrades. I have seen a few quotes from a HTC representative saying words to the above effect, but it doesn’t look as if they can’t resist… Ladies and gentlemen, the HTC Resist… See? They’ve got me doing it now!

I also think that it’s time for them to leave their UI overlay, Sense, behind simply because Jelly Bean is the business! Don’t get me wrong, I am not against user interface overlays such as Touch Wiz (Samsung), MotoBlur, etc. I think overlays have been good for Android and good for the manufacturers. I thought Sense was quite good and responsive, but it’s time for HTC to think about creating useful widgets and maybe even adding to Android directly! Can they do that? Android HTC? Pretty much in the way that Cyanogenmod have enhanced Android to the point where certain versions can run on handsets never intended such as my Galaxy S running Cyanogenmod 9 Ice Cream Sandwich! I had to root my Galaxy S to achieve it! I am looking to root my HTC Desire and Hero! I didn’t bother to sell or trade those models in because the money offered is a joke! I would like to remove the bloatware and make some room for apps that I want on the handsets! See current issue about “rooting”! Ooops, I digressed a little…

I would like to see HTC enjoying greater success!

Thank you so much for reading!