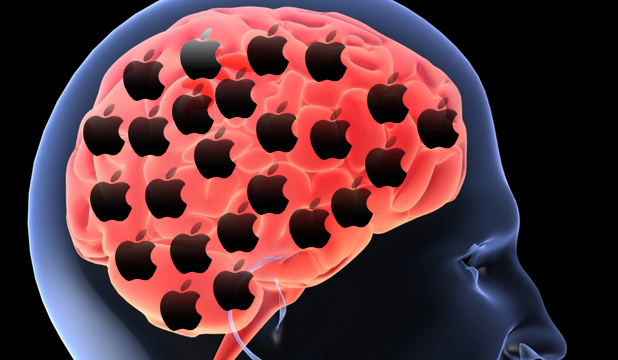 Good afternoon, Synapse Circuit Readers! Did you enjoy the Samsung Galaxy SIV teaser? I thought it was ok... I didn’t think it was up to their usual standard. That said I am still very, very curious as to what this new flagship handset entails!

It’s a wonderful feeling knowing that I will have a great range of handsets to choose from... Will I be upgrading to the Galaxy S4? The Galaxy SIV has great competition this year! Anyhoo...

I was wondering if Apple has brainwashed people... Why? I hear you cry. Ok, grab a beverage and allow me to explain...

COINCIDENCE?
C’mon, you should know by now that there is no such thing as coincidence.

Last week Friday I found myself in yet another sparring match with my dear friend who I adore; we love to tease each other over our weapons of choice:

Here’s what my adorable friend had to say about the MAC...

“IF YOU’RE A DESIGNER YOU SHOULD USE A MAC...”
Yes, the Macintosh has become synonymous with design / desktop publishing for one good reason: The MAC was the first computer to feature design software from Adobe, Photoshop and page layout software too! Don’t ask me what the page layout software was... I can’t remember. In any event the design houses and the publishing world took to the Mac.

As a result of being first there was elitism prevalent with the design industry fuelled by MAC users. Can you believe that you had to have an appointment in order to buy a MAC???? Yes, with the MAC shops you couldn’t just walk in and see a demonstration of the MAC in action. No. You had to go to the store or phone up to make an appointment.

As a result of elitism the cost to do anything in design / desktop publishing was high. Buying a MAC the costs were prohibitive for most people. To have designs done for you at a print bureau cost over the odds at one time.

So, does the idea expressed by my adorable friend still holds up today? No! Why?

As you can imagine, the MAC elite dug their heels in and sought to intimidate with an annoying amount of smugness and confidence trickery. Sure, there was a similar attitude in amongst PC users too which was short-lived due to college courses revealing how easy the software is to use.

In a nutshell, if you posses Adobe programs it really doesn’t matter if you use a MAC or PC.

It’s funny because coincidentally I went to a phone shop to research a blog and a sales person was trying to tell me to get an iPhone as it has great “design apps” and that opened up a discussion about the viability of the notion that the MAC is the best for design.

“THE MAC IS BETTER THAN THE PC BECAUSE I HAVE NEVER HAD A VIRUS...”
This could be true. Since I have had an assortment of PCs I have had a couple of virus problems. One was easily solved and the other had to be solved with formatting the hard drive. As you can imagine I was annoyed with Microsoft to say the least.

However, with the money I would have spent on a MAC I could afford to buy an antivirus program. I don’t think that it is valid to say that the MAC is better because it doesn’t easily get infected by viruses. Personally, I think it is sensible to protect ones PC from the possibility of attack.

“THE MAC FEATURES GREAT DESIGN. I WOULD RATHER PAY MORE FOR A MAC THAN A PC...”
Okay, fair enough... I would agree that the MAC has had some great thought put into the overall look of their computer range, but am I paying for looks or functionality?

The last time I looked you can buy a more powerful PC than if you spent the same amount on a MAC. I have seen people build “Hackintosh” systems whereby they use the top of the range PC components and with a bit of tech-trickery the MAC OS is installed on the “Hackintosh”. But if you can get the same software for the PC – i.e. Adobe software - then I personally wouldn’t bother with the MAC-hack!

And you do get what you pay for with the PC... You can purchase some beautiful looking desktop cases and the choice of monitor is vast just it is with the choice of components you can put in or replace. I have been known to dabble in music production and if I want to put in a professional soundcard then I can easily do so with a PC.

But I say each to his or her own. If you like a MAC then go for it. If you like PC then go for that too! If the truth be known I would have a MAC so that I can write about MAC software and hardware too! I don’t see the point in claiming one platform better than the other because they are just tools in the end: one is a Philips screwdriver and the other is the traditional screwdriver – the function is the same.

THE WINNER
The only winner is the person using the platform that he or she feels comfortable / happy with.

I use PC to edit can create videos, compose original music, design for print and I have had no problems. Back in the day I used to use the Amiga computer to create MAC compatible files that I would be able to print off at a MAC based bureau – I had to show the MAC computer operator how to access the file! He had no idea!

The spirit of computing is about productivity and that’s what I’m about!

Stay tuned for the conversation regarding “iPhone is better than Android...”