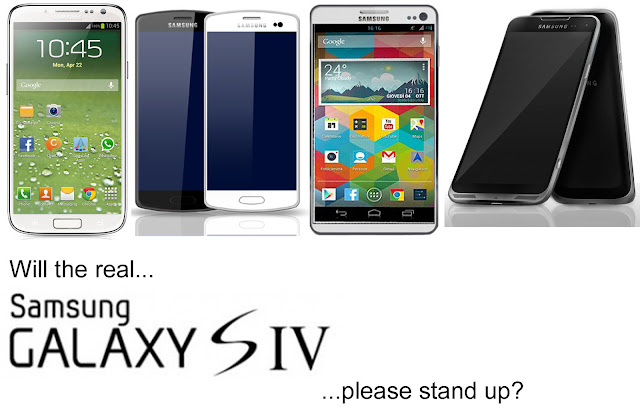 Dear, Synapse Circuit Readers... I hope that you’re not suffering from the freezing weather! Yes, some of us are drooling already on the thought of the Samsung Galaxy IV! Indeed, the rumour mill machine has been cranked up beyond 11! Let’s have a look at the rumours...

APRIL RELEASE
The best rumour so far is that Samsung could be releasing the Galaxy SIV to the world in April which neatly coincides when I am due for an upgrade on EE formerly Orange! As you can imagine, I would love for this April release date to be true! I have also learned that EE are dropping their 4G prices... Oooh, could be good! I haven’t heard anything negative about 4G lately – maybe they have fixed it! There again, I will know when they’ve fixed it when the demo handsets are back on the display table!

It could very well be that Samsung will announce the Galaxy SIV at the forthcoming Mobile World Congress in Spain next month! Somehow I doubt it. Samsung has created an event out of the Galaxy S that, in my opinion, has surpassed the launch of the iPhone. Heck, the launch of the next Galaxy S is more exciting than the next music release (apart from a few decent artists out there who can truly call themselves artists i.e. David Bowie)! The next Android or any other handset manufacture has replaced the charting of music singles and albums! It’s very much, “Who will take the top handset spot this week, month and year?” I can’t say that I am expecting much from Apple as the iPhone 5 was too pedestrian for my tastes.

So, why would Samsung release the Galaxy SIV in April instead of May? Hmmm... My guess is that the competition is molten hot with HTC, LG, Huawei and other manufacturers releasing their 5” plus handsets at the MWC! I would imagine that Samsung wants to great that buzz of anticipation that make Android lovers froth at the mouth and those who are thinking jumping ship from the usual suspects, iPhone, Nokia and BlackBerry (mainly) and not forgetting Android fans who remain faithful to any other manufacturer than Samsung. Again, the competition looks like they’ve caught up and perhaps could surpass the Galaxy S phone where the screen and other bits of hardware are concerned. I know what I want from the Galaxy SIV, a better camera, bigger battery and a more vivid screen beyond 300 dpi! I don’t think that’s much to ask for!

What I am also anticipating is the design! I have seen a few “leaked” pictures and I don’t think are for real. I am hoping that Samsung will produce another groundbreaking design!
FEBRUARY
The other rumour is that Samsung will release an 8” Galaxy Note that will put it up against the iPad Mini! I think this could work... The 8” Galaxy Note could do very, very well. If anything the iPad mini has proven that the high resolution screen isn’t totally necessary and I think that my prediction has come true in that Apple fans opted for the iPad mini instead of the most expensive full blown iPad model last Christmas. The Apple rumour is that there will be an iPad mini with a retina screen coming either in March or the summer!

But if the Galaxy Note is going to compete with the iPad mini then my question is: What’s it going to cost? The Galaxy Note II costs over £400! So, this could mean that the quality of the screen will be sacrificed, 1280 x 800 pixels, and maybe the CPU will be a dual core instead of quad. I’ve seen leaks where it is said to be a 1.6 GHz quad core and I wonder if it can be competitive. Or perhaps there’ll be two options – the other having higher spec. We’ll see... I am curious about this one! The Nexus is selling very well and it’s only an inch smaller! Maybe I will treat myself to the Galaxy Note 8 this summer!

SYNAPSE CIRCUIT NEW FORMAT
Synapse Circuit Readers! Just to let you know that I am busy working on a new format... Bear with me! I hope to get it up online in time to coincide with the end of this month... In the meantime please check out the Interactive PDF right here:
Synapse Circuit Dot Com!
Posted by Unknown at 18:39