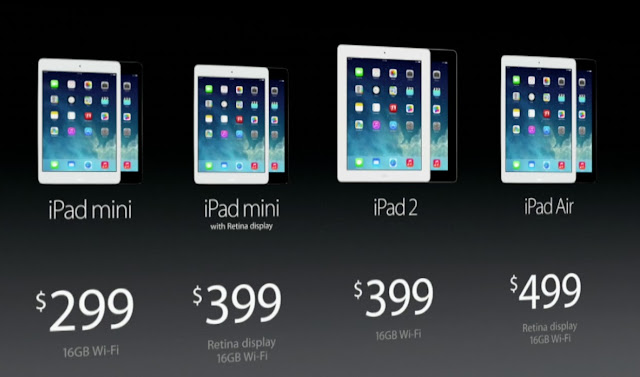 Good late evening, Synapse Circuit Readers! I hope that you’re having a great evening and if your day is still unravelling there is still time...

I guess I didn’t miss too much when I took a break... The World of Tech spun and continues to spin as per usual but I can’t say that I was too impressed with the latest iPad models from Apple and here’s why...

Radio No
GPS
Yes, with A-GPS support and GLONASS

POWER
There’s no doubt that the iPad Air is a powerful tablet but just look at the prices:

C’mon, such prices are unrealistic by today’s standards! It is no wonder that Android tablets are rapidly usurping the iPad! It is clear to me that Apple has run out of ideas because creating an extremely thin tablet made from aluminium and glass does not make for a device that is going to last. I have seen some drop tests – that didn’t have to be made – that proves how fragile the iPad Air is .Apple still wants to put the idea across that their devices are premium. As stunning as the iPad Air appears it is just not practical.

In my opinion the iPad (and any other tablet) should be made from durable materials as found on many Android tablets. Apple had the opportunity to use an unbreakable display in the way that Samsung and LG are promising but not quite delivering. Apple has fumbled the ball once again. It is sad but true.

The cost of the 128GB iPad Air with both WiFi and cellular is £739 and I would rather spend that kind of money on a Windows tablet with the full version of Windows 8 and an Android tablet! Why pay so much money for a tablet that runs apps when you can be running full programs on Windows based tablets?

iPAD MINI 2
Yes, at last, it iPad mini 2 has now received a retina screen but once again the price is too high for what it is. Here’s the cost of a base model on WiFi only: 16GB, £319. It’s a mere £80 cheaper and it might appeal to the dedicated Apple fan and it will therefore cannibalize sales of the iPad Air; déjà vu!

As far as the iPad mini 2 goes I think it is outmoded by the Google Nexus 7 2013 and a bunch of other Android tablets. You might even prefer a phablet instead such as the Galaxy Note 3!

Apple seriously needs to go back to the drawing board and rethink that this “premium” idea. Apple: rethink differently!

I hope you enjoyed this introduction. Stay tuned for more reviews to come.