THE THRILL IS ON!

Yes, I watched the whole Google event live! I've got to say that I'm happily eating my words! The products from Google looked superb in both the look and design of the hardware and, very importantly, the software!

Needless to say that I am very impressed! I just love the idea of the PixelBook, the Google Home devices, and, of course, the handsets! As you should know, I love my big screens and my handset is the Pixel XL 2! I love it! Yes, despite the “leaks” I was suitably surprised throughout the reveal!

I love the translation in real-time! This is the future right now!

I want everything I saw and I'm going to get 'em all too! Well, barring the smaller Pixel 2 handset. This is a remarkable feat from Google. I passed on last year's Pixel handsets and now… I want the lot! 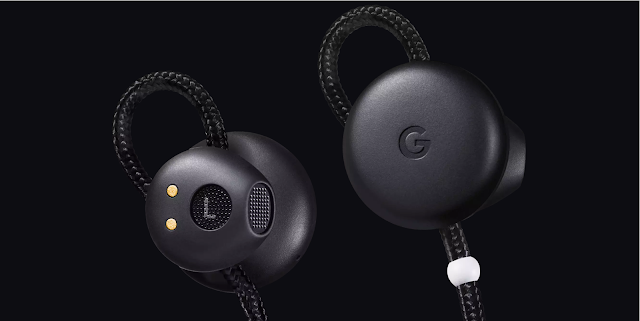 Above: Pixel Buds. Look at that wonderful design! So much better looking than Apple's Air Buds that look pretty stupid; whoever designed the Air Buds must have watched an episode of the Jetson's for inspiration! Anyhoo... The Pixel Buds come with AI that is Google Assistant. I just love that one can do live translation wearing the Pixel Buds and/or other compatible gear such as the Pixel 2 handsets. The Google Buds will set you back £159!

Look, from where I'm sitting, Apple seems hell-bent on its current self-destructive path. I mean, didn't Apple take on an additional “designer”??? And this iPhone X notch issue??? I don't get it! Anyhow…

Although Google were merciful in taking potshots it is very clear that Apple have run out of steam. Google have a vision and they are realizing it to great effect!

Apple, they've gone to the nursery and have created talking doody emojis, which was a great source of amusement for Apple. Then, on the other hand…

Google demonstrates - in real-time - an audible translation between Swedish and English! WOW! Time to renew my passport and get traveling again!

Above: Just look at the elegant design of the Pixel 2 XL... No ugly notch in sight! No headphone jack! But there is an adapter in the box! Cool!

No. No. Nooooooo! There's no point in making comparisons with Apple's offerings as they are different platforms! But, that said, the 2017 Pixel handsets appear to so much more satisfying! The designs are fantastic! No freaking notch in sight!

Can I compare them to the Galaxy S8, S8 Plus, and Note 8? Can I make comparisons with the LG V30? How about the Huawei Mate 10?

The beauty of Google Android and it being open to a vast array of manufacturers is that each manufacturer can create a unique experience and some of us have a tendency to own at least 3 handsets from different OEMS! I've lost count of all the phones I have from different OEMS. That said, Samsung and Google are my two top manufacturers! I might get the LG V30 and the Huawei Mate 10! 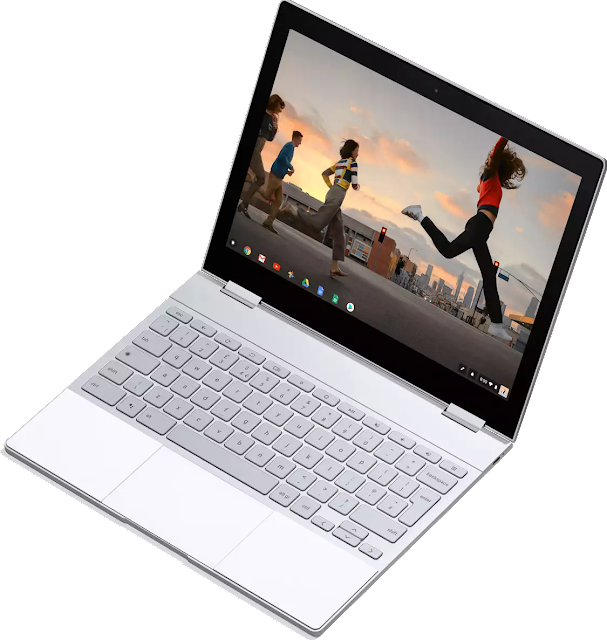 Above: The Google PixelBook! It is gorgeous and very desirable. Look at the spec for the biggest and baddest one: Intel® Core™ i7, 16GB RAM, 512GB NVMe SSD! Great, huh? Finally, a PixelBook - Chromebook that looks capable of video editing! Put me down for this one! I will have to find the most part of £2k to get the top of the line and a PixelBook Pen!

Yeah, yeah… Like me, you've noticed that there's no tablet offering… Well, in a few ways it's not surprising as the tablet market is having an identity crises at the moment. I wish Android tablets would just step up to the plate. Yes, I think there are great efforts from Samsung, Huawei and, maybe Asus… Of course, Google tablets are great too. The trouble is that most Android folk just want a tablet that's powerful, cost effective, and has a shelf life of a couple of years at least.

Apple have experienced a drop off in tablet sales and that's primarily because of the weird ideas the execs have… iPad mini, cuts into the iPad, iPhone Plus does the same to both the mini and 10” and the MacBook eats into the iPad Pro! While it's debatable as to the superiority of the Apple tablet over Android ones, it's clear that the iPads don't serve its parishioners; the flock have been led up the garden path instead of the promised land! The iPads are too expensive to the point where you may as well get a MacBook.

Look over your shoulder and the Windows platform has more scope what with the laptops that convert into a tablet (by folding away the keyboard) and then there are the Surface devices. These are real computers, and have more value as a consequence!

Whereas the Android tablet is a fusion of purposes: entertainment and productivity at a reasonable price - sometimes!

Saying the above, now that the PixelBook utilizes powerful Intel i5 and i7 processors I think it's another sharp nail in the iPad coffin and it opens up the possibilities for the Android tablet to come back strong in 2018! The Android tablet market just needs a manufacturer brave enough to do the following: -

There you go! It is pretty easy! Well, it appears that way! It just takes one manufacturer to make the first move... Which one will it be? Samsung? Hmmmm... I think Samsung is looking to usurp the iPad out of principal once and for all! Huawei have come the closest to delivering on a decent cost effective and well designed tablet. Here in the UK, the 8" MediaPad is not sold with the 4G radio. You can't go to an outlet like PC World and pick one up! Asus? They keep falling short! At one time Asus had some great ideas with Android tablets that was based around a phone that is slotted inside a tablet housing, they had some other decent ideas too... Lately, Asus have been trying but the power isn't quite there... Again, Archos looked as though it was about to unleash what could have been the perfect Android tablet and it never materialized. Oh, well... I think that Huawei is going to come through on the Android tablet front; they are almost there...I think the 8" MediaPad 4 ought to do it! I think Google should have offered a tablet - at least an 8" one! The Pixel 8" - cool name!

A new smartwatch was absent; I think there's scope for Android Wear - well, kind of… I think the smartwatch needs a bigger wrap-around screen and use the full Android operating system. Both Google and Samsung had a great headstart but they didn't ignite like they should have. I think Samsung’s Gear efforts are better than the Apple Watch; it's just that the media exaggerates what Apple does to the point of absurdity. It's a shame. I think the Apple biased tech media stagnates the growth of true innovation. I think Google gets despondent when Apple gets all the accolades for crap! I also wish Apple would do something that deserves the press attention for a change. A talking poop emoji??? For crying out loud!

Oh well… Yes, I wanted to see a version of Google Home with a screen to enable video calling… I envision a range of screen sizes for the purpose… It makes sense with all this wallpaper screen technology. Now that would be really futuristic! 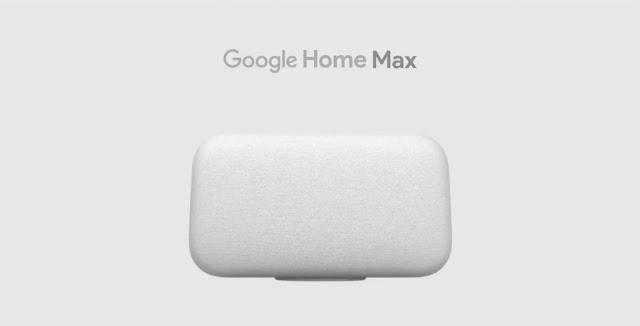 Above: Google Home Max. It costs a pretty penny at $399, but it may be useful for a lot more than Google Assistant... I could possibly use it for music composition... The speaker quality is supposed to be excellent! Hmmmm... We'll see... At least I will definitely get a great Hi-Fi out of it! You can stand 'em up in portrait or landscape as shown in the pic! I may have a couple of those when it is ready!

Below: Google Home Mini, it will retail at $49! Pretty good going! 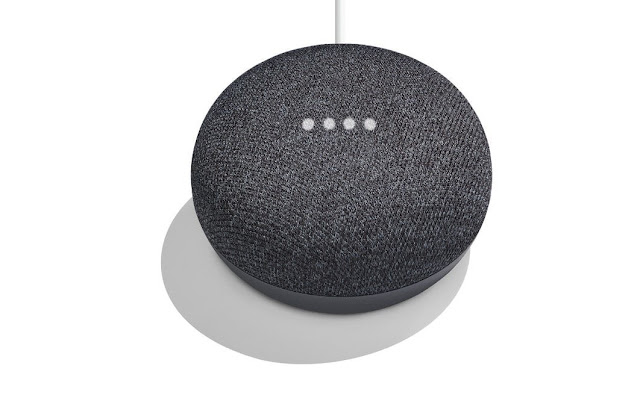 UNSTOPPABLE
It's clear that Google possesses a far reaching understanding of how technology can enhance our lives. 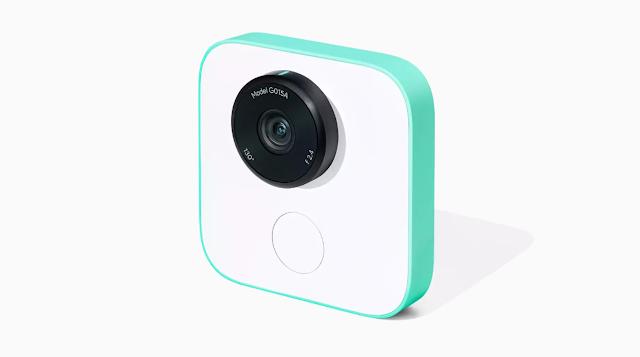 Above: Google Clips. It looks like a very useful camera to capture aspects of one's life and create long lasting memories. It captures soundless video clips, which is a bit of a shame as it would make for a great spy camera. That's going to cost about $249.

Across the board, Google, Android and its OEMS are doing more exciting things with Technology than Apple. I keep telling people... No, I don't hate Apple but what it does is hijack the ideas of others and make it look like it has innovated when they haven't. I find that annoying! Yes, I did consider a Mac computer because of the video editing possibilities but I would NEVER think about an Apple computer now! I would rather buy a powerful Chrome desktop with a AMD Ryzen chip in it - if it were possible! I would take the chance. People underestimate the Chrome Apps! However, a dual Chrome and Windows desktop would be something... Come to think of it, we have this right now! I only have to access the Chrome App marketplace on my PC when using the Chrome browser. Well, with Windows there are so many decent software applications such as Serif Affinity Photo and Designer - if you are looking for a cost effective to Adobe Photoshop and Illustrator. Not to mention that you can still pick Serif PagePlus for a DTP program that is perfect for publications that require professional printing. Forget PagePlus for digital publication for the moment... Are you with me so far? You want to edit videos? Just check out what MAGIX is doing by the way of video editing software. I don't know how fast the MAGIX video software is compared to Apple's Fastcut, but you have to remember that the cost of the Windows based PC will get you more for your money compared to any Mac! At the very least you get USB ports and a soundcard that you can plug a headphone into! If you want to make professional music on the PC you have so much more scope than you have on the Mac! I digressed a little...

So, from DeX to Google Home to Clips, etc you feel like the future you were promised by Sci-Fi and Technology TV shows is finally coming to life!


Awesome stuff! I will catch on the next one!
Thank you for reading! I am very, very impressed with Google's 2017 line-up! They are very desirable indeed! Synapse Circuit / Blue Gene
Posted by Unknown at 15:03